By Staff for HealthLeaders Media

The five states with the highest percentage of “A” hospitals this spring are Maine, Hawaii, Oregon, Wisconsin, and Idaho.

The Leapfrog Group  released its latest “safety grades” Wednesday for the 2,639 hospitals participating in the group’s annual survey. Of that group, 31% (823) earned an “A” and 27% (706) earned a “B,” according to the nonprofit, which advocates for quality and safety in healthcare.

The Leapfrog Group began using the letter-grad ranking system in 2012. The grades are based on a numerical score for calculated for each hospital based on a review of 30 patient safety measures.

The organization generates the score using data from the Centers for Medicare & Medicaid Services, data from its own hospital surveys, and data from other sources, including the American Hospital Association’s Annual Survey.

The findings are “weighted and then combined to produce a single, consumer-friendly composite score that is published as an A, B, C, D or F letter grade.”

Half of the grades are based on process measures, such as hand hygiene and physicians staffing at intensive care units. The other half of the grade is based on outcome measures, including rates of patient falls and infections. 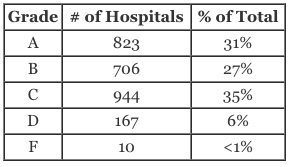 Leapfrog notes that the five states with the highest percentage of “A” hospitals this spring are Maine, Hawaii, Oregon, Wisconsin and Idaho. Maine, which is ranked first, is the only state to make it to the top five each year since the safety grade program began in 2012.