Tom Davenport for Forbes
Thomas H. Davenport and Steven Miller
The coding of medical diagnosis and treatment has always been a challenging issue. Translating a patient’s complex symptoms, and a clinician’s efforts to address them, into a clear and unambiguous classification code was difficult even in simpler times. Now, however, hospitals and health insurance companies want very detailed information on what was wrong with a patient and the steps taken to treat them— for clinical record-keeping, for hospital operations review and planning, and perhaps most importantly, for financial reimbursement purposes.

The current international standard for medical coding is ICD-10 (the tenth version of International Classification of Disease codes), from the World Health Organization (WHO). ICD‑10 has over 14,000 codes for diagnoses. The next update to this international standard, ICD-11, has already been formally adopted by WHO member states in May 2019. WHO member states, including the US, will begin implementation of ICD-11 as of January 2022. The new ICD-11 has over 55,000 diagnostic codes, four times the number of diagnostic codes contained in the WHO’s ICD-10. 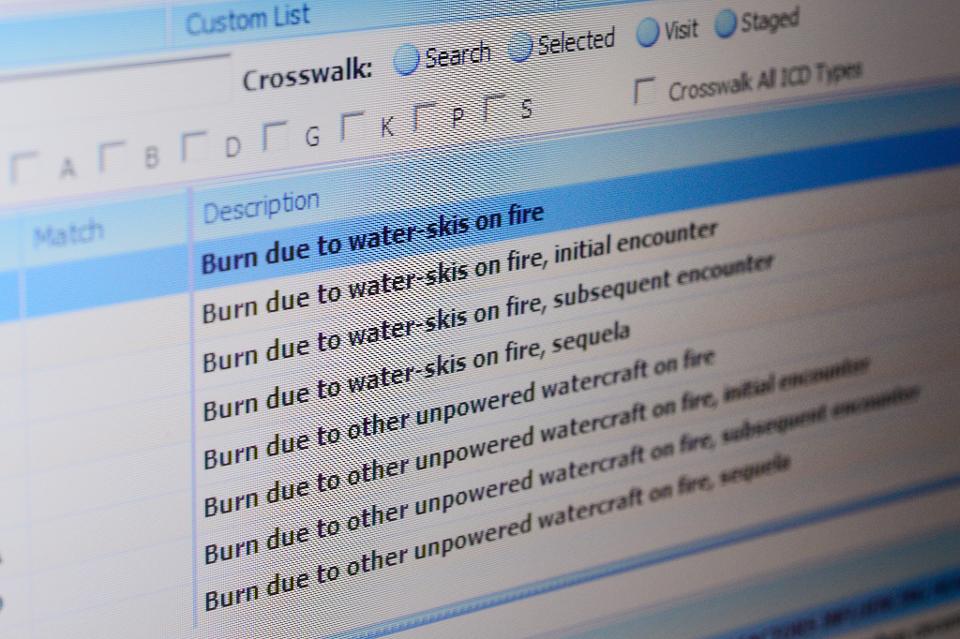 From Forbes.com: DENVER, CO – NOVEMBER 25: The ICD-10 code for being burned due to water-skis on fire on the computer of Dr. David Opperman at the Colorado Voice Clinic on November 25, 2015 in Denver, Colorado. Opperman like many other doctors are having to deal with the new 69,000 diagnostic codes to describe issues the aliments of their patients including burned while water skiing and injured in spacecraft collision.

In fact, there are even substantially more codes than the numbers given above, at least in the United States.  An enhanced version of IDC-10 that is specific to usage in the United States has about 140,000 classification codes, about 70,000 for diagnosis, and another 70,000 codes for classifying treatments.  We expect the enhanced version of IDC-11 that will be specific to usage in the US to have at least several times number of codes in the WHO version of IDC-11 given that the US version also includes treatment codes and has previously included a larger number of diagnostic codes as well.

No human being can remember all the codes for diseases and treatments, especially as the number of codes has climbed over the decades to tens of thousands. For decades, medical coders have relied on “code books” to look up the right code for classifying a disease or treatment. Thumbing through a reference book of codes obviously slowed down the process. And it is not just a matter of finding the right code. There are interpretation issues. With ICD-10 and prior versions of the classification scheme, there is often more than one way to code a diagnosis or treatment, and the medical coder has to decide on the most appropriate choices.

Elcilene Moseley lives in Florida and is an 11-year veteran medical coder. She previously worked for a company that owned multiple hospitals, but she now works for a coding services vendor that has a contract for coding in the same hospitals Moseley used to work for. She does her work from home, generally working for eight hours to do a certain number of patient charts per day. She specializes in outpatient therapies, often including outpatient surgeries.

Moseley is acutely aware of the increased complexity of coding and is a big supporter of the AI-enhanced com coding system—developed by her employer—that suggests codes for her to review. “It’s gotten so detailed—right side, left side, fracture displaced or not—there’s no way I can remember everything.” However, she notes, “AI only goes so far.” For example, the system may process the text in a chart document, note that the patient has congestive heart failure, and select that disease as a code for diagnosis and reimbursement. But that particular diagnosis is in the patient’s history, not what he or she is being treated for now. “Sometimes I’m amazed at how accurate the system’s coding is,” she says. “But sometimes it makes no sense.”

When Moseley opens a chart, on the left side of each page there are codes with pointers to where the code came from in the chart report. Some coders don’t bother to read the patient chart from beginning to end, but Moseley believes it’s important to do so. “Maybe I am a little old fashioned,” she admits, “but it’s more accurate when I read it.” She acknowledges that the system makes you faster, “but it can also make you a little lazy.”

Some patient cases are relatively simple to code, others more complex. “If it’s just an appendectomy for a healthy patient,” Moseley says, “I can check all the codes and get through it in five minutes.” This is despite multiple sections on a chart for even a simple surgery, including patient physical examination, anesthesiology, pathology, etc. On the other hand, she notes,

If it’s a surgery on a 75-year-old man with end-stage kidney disease, diabetes, and cancer, I have to code their medical history, what meds they are taking—it takes much longer. And the medical history codes are important because if the patient has multiple diagnoses, it means the physician is spending more time. Those ‘evaluation and management’ codes are important for correctly reimbursing the physician and the hospital.

Moseley and other coders are held to a 95% coding quality standard, and their work is audited every three months to ensure they meet it.

When Moseley first began to use AI-enhanced coding a couple of years ago, she was suspicious of it because she thought it might put her out of a job. Now, however, she believes that will never happen and human coders will always be necessary. She notes that medical coding is so complex and there are so many variables, and so many specific circumstances. Due to this complexity, she believes that coding will never be fully automated. She has effectively become a code supervisor and auditor—checking the codes the system assigns and verifying if system recommendations are appropriate for the specific case. In her view,  all coders will eventually transition to roles of auditor and supervisor of the AI-enabled coding system. The AI system simply makes coders too productive to not use it.

Moseley has a two-year “Associate of Science in Medical Billing and Coding” degree. In addition, she holds several different coding certifications—for general coding and in her specialty fields like emergency medicine. Keeping the certifications active requires regular continuing education units and tests.

Not all coders, however, have this much training. Moseley says that there are lots of “sketchy” schools that offer online training in medical coding. They often overpromise about the prospects of a  lucrative job—with an up to $100,000 annual salary—if a student takes a coding course for six months. Working from home is another appealing aspect of these jobs.

The problem is that hospitals and coding services firms want experienced coders, not entry-level hires with inadequate training. The more straightforward and simpler coding decisions are made by AI; more complex coding decisions and audits require experts. The “newbies” may be certified, Moseley says, but without prior experience they have a difficult time getting jobs. It would require too much on-the-job training by their employers to make them effective. The two professional associations for medical coding, AAPC (originally the American Academy of Professional Coders) and AHIMA (American Health Information Management Association), both have Facebook pages for their members to discuss issues in the coding field. Moseley says they are replete with complaints about the inability to find the entry-level jobs promised by the coding schools.

For Elcilene Moseley, however, coding—especially with the help of AI—is a good job. She finds it interesting and relatively well-paid. Her work at home—at any hour of the day or night—provides her with a high level of flexibility. If she didn’t like her current position, she is constantly approached by headhunters about other coding jobs. Moseley argues that the only medical coders who are suffering from the use of AI are those at the entry level and those who refuse to learn the new skills to work with a smart machine.